First things first: I had my scans on April 2. They were fine.

What follows is a partial history in photographs, because the extent of my pandemic-induced spring cleaning frenzy has been to move thousands of photos off my phone.

“What good was cancer in April? / No good at all,” sings Lou Reed. Don’t I know it. The 16th of April has become a day that lives in my personal infamy.

On April 16, 2013, I was sitting at the computer in my Brooklyn apartment when my dermatologist called with grim news about the biopsy he’d taken from my back a few days before. It was spring in Brooklyn, and I looked out the front window at a flowering tree as I called J. to share the news. Two days later, I met my surgeon at NYU, Dr. Richard Shapiro. (His opening line: “You seem like a nice person. How did this happen?”)

Several days after that, I was at an interview for a librarian job at a nearby university that was never able to hire me because they ran out of money. That that would be the outcome of the process was pretty apparent to me when I used the restroom before the interview.

How old were my kids when this all started? Young A had just turned three. And Young J, age six, had brought home from school a biography of Albert Einstein. This page gave me a good laugh.

I was cleaning off my desk yesterday and found the notebook I used to carry to appointments in the early days of cancer, the ancient history. I was given to melodrama, it seems, and just as hard on myself as ever. 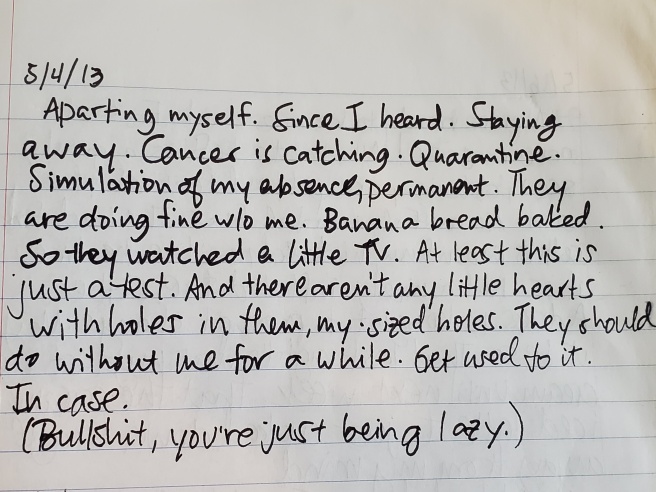 The next chapter of my cancer adventure took place in the fall and winter of 2014, when lung metastases showed up, and were handily dispatched with a short course of radiation and an immunotherapy regimen that was aborted when it gave me colitis that lasted for several weeks.

When I emerged from that episode and its aftermath, I had gotten a librarian job at another college, an hour’s commute from our home in Brooklyn. I was two months into that job when I had another CT scan to check on my lungs. Things had been steadily improving, and on April 15, 2015, I went to see my beloved Dr. P, who had already seen me through some very hard times, for scan results. This card was in the pocket of my spring jacket.

I had been extremely tired for weeks, but I attributed it to my new commuting schedule and readjusting to full-time work after a number of years away. When Dr. P and her nurse practitioner came in to give me the results of my scan, I saw them high-fiving in the hallway before they came in. My lungs were NED — no evidence of tumors anywhere, even though I’d had to stop the immunotherapy. That response has endured until today.

I was trying to be as elated as my doctor, but I was just exhausted. I mentioned this to her, but I didn’t mention that that morning at work, I’d had a meeting with a student and noticed I was having trouble finding words.

The next day, April 16, 2015, I went back to work, met with students, and had so much trouble communicating I was almost resorting to sign language (which I do not know). Something was not right. I called Dr. P, and was instructed to head directly to the ER. I had an MRI, which showed nine lesions in my brain. I was admitted to the hospital, pestered by neurologists all night, and woke up the next morning to the most ridiculously gourmet hospital breakfast in the history of hospital breakfasts.

I was sent back to Dr. P, and while I waited to see her I asked J. to get me my go-to cancer convenience food for stress, a strawberry frosted doughnut from the Dunkin next door. Before I could wolf down this treat, I was in possession of renewed confidence from Dr. P, a game plan, and some new-to-me medication.

While this was all going on, it was again spring in Brooklyn, which means one goes to the botanic garden and enjoys the blooming trees along with everyone else who had the same original idea.

I wasn’t just on Tafinlar, I was on huge doses of dexamethasone. This put me in a very good mood but also made me crazy. Instead of looking at the flowers wistfully, sure I’d soon be dead, I was swept up in the grand adventure of being out walking in the world at Stage Four, with nine tumors in my brain, and felt sure I’d be OK. Those were some powerful drugs.

Young J and Young A were eight and five years old by this time. They still remember me on those steroids. I was loquacious, full of schemes, but not particularly well-suited to parenting young children. I could only handle seeing one of them at a time, because their combined energy was more than I could metabolize. I quit my job to focus on getting well, and never managed to return to librarianship.

Now I’ve reached another April 16th. I am five and seven years removed from the worst versions of this date, but they’re still close to the surface, as accessible to me as dirt under my fingernails — by which I mean, I dig for it. I don’t want to forget what it felt like to have the rug pulled out from my naive understanding of what being alive meant. When I lose entire days in contemplative inactivity, I am eternally aware of the privilege associated with being able to do that. Many people with my same stats and my same chances did not get to make it this far. I used to think of them every time I took my meds. Now that I no longer take meds, I think of them when I am going to sleep at night. Endless permutations of why them? why not me? / why not them? why me?

Today, Thursday April 16, I have a checkup with the nurse practitioner. Owing to the pandemic, it will be a video call. No vitals, no bloodwork, nothing at all but a conversation. She will ask how I’ve been feeling, and I will tell her that I feel fine. She doesn’t need to know that I’m having a cancer checkup on a date that lives in infamy — those old dates are buried in my chart, now largely irrelevant to my medical present. She doesn’t need to know about the low-grade blues that set in ever since coronavirus shut us all up in the house, defying me to access the better angels of my nature, smacking down my self-worth when I find I cannot, imploring me to shower more often than every third day.

I’ve reached the stage of living with cancer where the main things wrong with me are no longer attributable to cancer. That’s both a relief and a worry: I know very well how to deal with cancer. I don’t know how to cope with living under threat from a disease that isn’t as selective as cancer, one that may mercilessly take my loved ones from me in spite of every precaution.

We put some more bulbs in the ground the other day, and I’m getting slightly obsessive about checking on their progress. It felt good to sit in the dirt, to feel and smell and see that so many things happen in April that have nothing at all to do with cancer.

Unauthorized use and/or duplication of this material without express and written permission from this blog’s author and/or owner is strictly prohibited.

Excerpts and links may be used, provided that full and clear credit is given to Deborah Wassertzug and I’ll Live – Cancer is hard, but not the way you think, with appropriate and specific direction to the original content.