I’m making some New Year’s resolutions after the fact, which may be the best time to make them – when you get a sense of what you’re interested in working on, what you have energy for, what will take you to the next stage.

For me it involved finally accepting that if I’m going to get writing done in the volume and of the quality I’d like to be, it must be acknowledged that my “desk” is not the place that will happen. My “desk” is in the middle of the living room, inches from near-constant chaos. The “desk” is just a shelf deep enough to accommodate a computer keyboard. The kids have discovered they like using my desktop computer to type stories, or to get lost on Google Street View (we still say No to Minecraft). While that machine may be good for those things, and as a home to my music on iTunes and as the archive of photographic evidence of our family, and as home base when I have a translation job, it is not a good place to Compose. It is not even a good place to decompose.

When I first moved to New York, my parents brought me this bookcase:

It was a floor model from IKEA. They weren’t going to sell that finish anymore, I think. I already had two larger, functional bookshelves I’d bought myself when I lived in Michigan. They were totally hideous. So I stashed those in my bedroom, and this became the “display” bookcase. I organized books in it by color, stacked literary magazines in it, and tucked other nonprint items in among them. It was probably the start of my individual consciousness about things not just being functional but also looking nice. (I’d never really had to think about that before, because I grew up surrounded by teak Danish modern furniture, which – other than clutter – was the prevailing aesthetic in my house.)

In the evenings, I’d sit in my sky blue easy chair (also from IKEA, but it had belonged to my grandparents) next to my bookshelf and read, or write, next to a phenomenon I still can’t believe was mine, in a city where people claw and scratch for every square inch:  a ten-foot long window, with an unobstructed view of the Hudson River. Sunsets every night. Tankers and barges floating by, and sometimes, on holidays, tall ships. I kind of knew how good I had it, and I surely know now. Our view out the back windows today is quiet and verdant, in season, but largely dominated by an above-ground eyesore swimming pool that occupies our neighbors’ entire backyard and is used once a year, if at all.

Time passed, and we moved to Brooklyn, and the bookcase now lived in our bedroom. We hadn’t quite been in Brooklyn a year when Young J joined us, and in those bleary-eyed newborn weeks, the bedroom became the most important room in the house. Greeting cards, tubes of lanolin, nursing pads, breast pump parts, burp cloths – suddenly, these became the residents of the bookshelf. The apartment, bit by bit, was overrun. Plastic baby gates obscured the TV set, so we stopped watching TV for a year or so. The teak Danish modern furniture I’d been lucky enough to inherit became burdensome or perilous, and we sold it. This bookcase stood its ground, eventually becoming home to baby items again when Young A came along. It held the annoying kiddie trinkets which were seized, to be returned after a specific period of time, but which were forgotten instead. It held my Cancer Notebook, where I first began chronicling my melanoma, as a private journal, because I thought it was going to be a brief episode. The bookcase filled with get well cards. It held dozens of actual books as well. Books I had read, was in the middle of reading, meant to read – the latter category being the most populous. (My attention span has atrophied significantly in the past year-plus.)

We began working with an organizer last year, and she singled out the bookcase for special derision (good-natured derision, but still, very effective). I began to resent the thing. It was the first thing I’d see when walking into my bedroom, which has risen to prominence again in my illness, as a safe haven. And it was messy. It wasn’t going to be enough just to empty it, though. I began feeling strongly that the shelf just needed to go. And when the urge became strong enough, I did what I hadn’t managed to in years. I went through the shelf, unsentimentally discarding a good 65% of its non-book contents. When J went out one night for a couple of hours, I cleared everything off, and when he returned, around 10 p.m., we walked the thing downstairs to the curb. I hoped the whole next day that I’d see someone had taken it, but it was simply too heavy to just haul off on a whim. The following morning, trash day, it was gone. I felt just a molecule bereft, but not remorseful.

Last week, J and I spent some quality time at IKEA. Most of the time was spent discussing new sinks for the bathrooms, but we also decided what we’d put in the space the bookcase left. Our organizer not only derides our propensity for hoarding (though she assures us we are not, in fact, hoarders) – she has also helped us build a vision of what we’d like for ourselves, in the very limited space available. She imagined a small desk in our bedroom, replacing the bookcase, where I could sit to write, far from the madding crowd of LEGO people and wooden train tracks and J watching basketball on his computer.

Thanks to her vision, and to my finally deciding the time had come, and thanks most of all to J, for taking the better part of his day off to make it happen, and for being a genius with a level and a drill, the vision is reality. I’m writing to you from my new desk. I could stay here all night.

I love this man 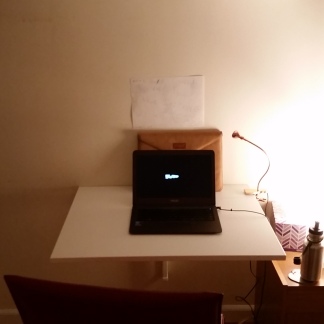 Unauthorized use and/or duplication of this material without express and written permission from this blog’s author and/or owner is strictly prohibited.

Excerpts and links may be used, provided that full and clear credit is given to Deborah Wassertzug and I’ll Live – Cancer is hard, but not the way you think, with appropriate and specific direction to the original content.